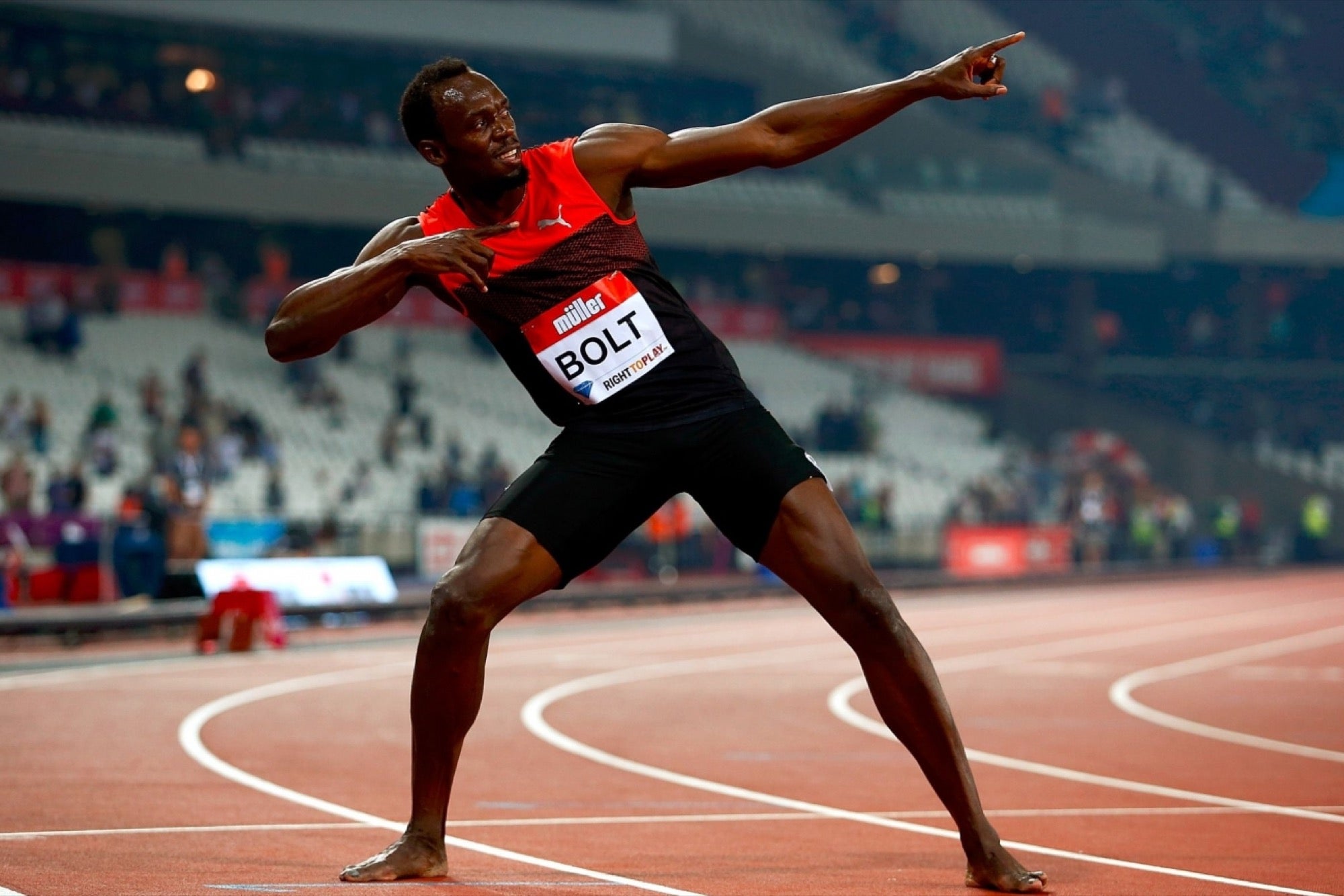 Have you ever watched Usain Bolt‘s 200 meter race in the 2008 Beijing Olympics? Go watch it now. It’s incredible — while everyone else is busy competing, Bolt is out in front, completely dominating the competition.

I’ll be the first to admit it, I want that level of success for myself. And in order to ensure success in a crowded market, you need to start thinking beyond competition and move into the realm of domination. The very best way to do that is to invest hardcore in yourself and your personal brand. If you don’t become the go-to person in your industry, someone else will.

Usain Bolt is a terrific example of someone who’s pushed himself to the top of his field and developed a stellar personal brand in the process. Here are four key lessons about personal branding we can learn from the “Lightning Bolt.”

Usain Bolt is the world’s fastest man, and there is no doubt about that. (When you type into Google “who is the fastest person?” guess who’s name shows up?)

Related: 3 Ways to Keep a Setback From Becoming a Disaster

The records speak for themselves, but Bolt doesn’t let them. His brand message as the “World’s Fastest Man” is all over his website and is the name of his 2010 memoir. Bolt then uses that credibility to partner with Puma and 9 other global partners who are looking to cash in on the brand recognition. The result is $30 million in endorsements for Bolt and tons of help pushing his brand into the marketplace.

If there is one thing you can say about Usain Bolt, it’s that he delivers amazing results again and again. Aside from one false start disqualification in 2011, Bolt has enjoyed an unprecedented string of first place finishes since those Beijing Olympic games in 2008.

When building a personal brand, consistency is key. If it takes five to seven impressions for someone to remember a brand, imagine what it takes for someone to think of you as a celebrity in your space. One amazing race, article, viral video or PR stunt is not enough.

Related: The Right Way to Start Branding Yourself Right Out of College

Bolt makes this lesson clear in his own life. Aside from his record-breaking race times and Olympic medals, several books, a number of popular social media channels, an animated film and even his own emoji. And that’s just from a quick Google search. Say what you want about Bolt’s endorsement deals, he is doing a terrific job of using his own channels to get his brand in front of a massive audience.

You don’t achieve Bolt’s level of success without making a serious investment in yourself. All of those speed training exercises, gym sessions, stretches and sprints require dedication and big sacrifices in other areas of his life.

And despite what you hear about Bolt’s love for fast food, the majority of his diet is incredibly clean and rationed out. Bolt has a personal chef who makes sure he eats everything he’s supposed to and lays out his vitamins and supplements so he can’t forget them.

Related: It’s Not You, It’s Your Story: Why Branding Matters

Think about how many actions Bolt takes each day that help make him a better sprinter.

And now think about your career goals. How many actions do you take to help you reach those goals day in and day out?

If you want huge levels of success for yourself, then start thinking about how you spend your time. What written, video and audio content are you consuming each day? What people are you surrounding yourself with? Once you catalog where your time is going, you can figure out where you want it to go and what you want to cut.

Despite Bolt’s international fame, he still comes across like a real person. He complains to reporters about training, admits to fast food cravings and celebrates like a maniac after a huge race.

In short, Usain Bolt is authentic. Without his showmanship and dietary concessions, Bolt would still be the same decorated runner. But he wouldn’t be nearly as compelling or relatable, two traits that are critical for a sticky personal brand. While the rest of the runners on the track are trying to fit in, Bolt is just being himself and reaping the benefits.

The antidote to a boring brand is to be yourself. It’s much easier to be yourself than it is to be anyone else. And people are drawn to authentic characters living out authentic lives. Win-win.

Authenticity is all about being true to who you are at your core. So the next time you feel yourself forcing your personal brand, remember that you need to “extract” your brand, not “build” it.

How to Amp up Your Videos and Podcasts with New Beats
A Minimalist’s Approach to SEO: The Only 3 Things You Should do Every Week To Get Traffic
6 Great Email Marketing Campaigns Examples (As Chosen By Experts)
The Growth Machine Behind Canva’s $6 Billion Business
Sales Training – 8 Tips On How To Set Expectations During The Sales Process