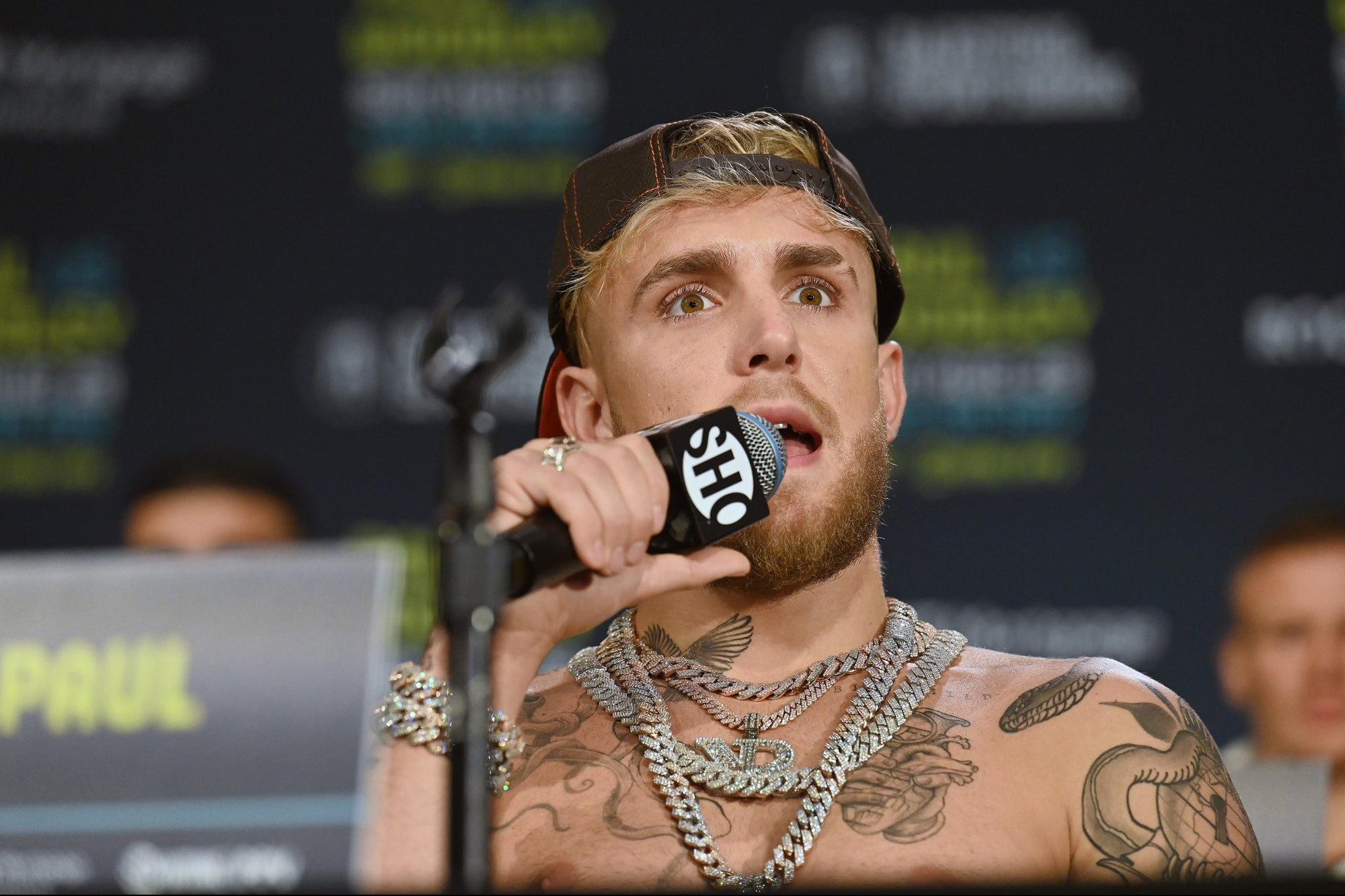 The first thing I said to Jake Paul when we sat down together at his home in Dorado, Puerto Rico was “thank you,” because he’s part of the reason I started boxing a few weeks ago.

As someone who has dealt with ADHD since I was a child, the intense training has worked wonders on counteracting my symptoms such as depression and fatigue. Turns out research supports my anecdotal experience.

New literature shows that, for people with ADHD, intense bouts of exercise that emphasize coordinated, repetitive movements — like jabs, crosses and hooks, sticking with our boxing example — lead to more coordinated, focused behaviors outside of the gym.

A blessing for those of us with this disorder.

Although I didn’t ask Paul if he has ADHD, he did share with me that he’s dealt with anxiety and other mental health struggles, a fact that might have some of you scratching your head asking Why?

If you didn’t know, Paul is on the Mount Rushmore of influencers. At one time, his home was a 15,000-square-foot mansion in Calabasas, one of the richest zip codes in America.

His net worth was estimated to be over $10 million in 2017, making him the seventh-highest-paid YouTube star in the world at the time, according to Forbes.

He amassed millions of subscribers and billions of views on his YouTube channel and was living a life most young people dream of (54% of Gen Z and millennials would become an influencer if given the chance, according to a report by Morning Consult).

Until he found boxing. And what’s it’s done for me, it’s done for him tenfold. It didn’t just alleviate his anxiety and resentment. It gave him purpose, meaning, structure and stability. Things we could all use more of.

“When you’re young, living in LA, filming videos all the time.. you’re friends with everyone… there’s a new party every single night… It’s chaotic. [But] it’s a dead end. It’s not a realistic lifestyle. LA is a fantasy world you can get caught up in,” Paul told me. “And I did. [But] when you’re getting hit in the face or hitting someone in the face, nothing else matters. All that matters is that present moment.”

Now, it’s not the millions of subscribers or billions of views that matter most to him. It’s the man standing across from him inside the ring. And this Sunday, August 29, he’s facing off against Tyron Woodley, a four-time defending UFC Welterweight champion.

Yet Paul feels better than ever, primed and ready for the biggest fight of his life.

Here’s what you can learn from Jake Paul’s transition from YouTube star to professional boxer, so you too can find more meaning and fulfillment in your life, all while eschewing your demons and bettering yourself.

Who knows? After reading this, you might be inspired to put on boxing gloves for the first time too.

(Paul’s responses have been edited and condensed for clarity and readability.)

In Paul’s old life, chaos was commonplace. Every day was different. This made life exciting for him, but the joy was fleeting and eventually, the inconsistency got to him.

Given Paul’s successes, hearing he felt this way hit me like a shot, as my life too has been defined by the highest of highs and the lowest of lows. What entrepreneur hasn’t experienced this phenomenon?

Before long, Paul began to crave what all of us do as we mature: structure and stability.

“You can’t live in a mansion with all of your homies, just partying every single day,” he says. “What are you going do when you’re 30? You’re going wake up and be like, ‘All right guys, let’s go to the club?’ No, you’ve got to grow up at some point.”

Boxing forced him to grow up, take a hard look at himself and confront his flaws head on. But that grueling process gave him the structure and stability he longed for.

And the bedrock of his structure and stability has been his day-to-day routine — his process.

“Learn to fall in love with those little improvements that you’re making [every day]; learn to fall in love with the art and the process. That’s one of our sayings as a team, because it can get repetitive when you’re doing the same thing week after week after week. So we find fun in the little moments. That helps everything. It doesn’t feel like a job, and it’s a healthier lifestyle [I live now].”

Don’t try to cheat the process, because you’re only cheating yourself. Instead, acknowledge you will have to fight to get to where you want to be. Embrace the repetition, as therein lies the improvement.

Be courageous enough to look at yourself in the mirror, acknowledge your shortcomings and embrace the day-to-day challenges as you work to overcome them.

Look your problems in the eye for long enough, and solutions might look back at you.

When I asked Paul about his future and how most people have a vision of working to retired and sit on a beach someplace, he acknowledged he felt that way once, too.

“I always had the thought that [one day] ‘Oh, I’m just gonna retire and go chill.’ But then I [was] like, ‘No, I enjoy the game of life, and I enjoy the chess match that we play every single day’. Getting and accomplishing our goals.. that’s really what’s fun. That progress keeps everything exciting. Now I think it would be boring to retire.”

As entrepreneurs, it’s easy for us to immerse ourselves in the metrics. That has its purposes, but it’s wise to take a step back and look at the bigger picture, too.

Life is a series of games, so why not make them games you enjoy? Don’t create a life you want to escape, run or retire from. Instead, create a life rich with challenges that amplify your actions with purpose.

3. “Bring excitement to the fight.”

Just visit any social media post with his name on it, and you’re guaranteed to find ire and outrage. Paul acknowledges this. Hell, I’m prepared for it simply because I wrote this.

And although many boxing greats like Mike Tyson have said Paul’s transition to boxing has been good for the sport, many combat sports fans feel differently.

But Paul continues to succeed. Why? Because he’s bold and brings excitement to his fights.

To paraphrase the great Robert Greene, who wrote in his classic The 48 Laws of Power, “The timid are frowned upon. You shouldn’t choose a course of action half-heartedly. Your doubts will become apparent and will tarnish your reputation. It’s always better to act boldly.” Despite the critics and naysayers, Paul remains bold in his actions.

Be bold too, in your own way.

“A lot of boxers are like, ‘He doesn’t deserve to be where he’s at or doing these big fights [because] he didn’t work like us,’” Paul says. “What people don’t understand is that I’ve been working since I was 10 years old… polishing my content skills, polishing my marketing skills, polishing my business skills. And that has set me up to where I am today. I was working just as hard, just in a different way.”

“It’s been beneficial, because all of that just grows what I’m doing, and I’m able to get my message out there and market myself. And I think a lot of fighters see that, hopefully I can inspire them to maybe take a note from my book and be like, ‘All right, we need a YouTube channel, we need TikTok. We need to be [on Twitter], we need to bring excitement to the fight,’ versus just showing up and being a fighter.”

The takeaway here is to bring excitement to everything you do. As an entrepreneur, never underestimate your life experience because it doesn’t fit the mold or society’s expectations.

Paul has been written off by many because he was a content creator and marketer first. Unbeknownst to them, this is his greatest advantage, as it allows him to drum up excitement long before the fight starts.

So, ask yourself: How can you leverage your unique life experiences to stand out, shake up your industry and keep things exciting, for yourself, for your customers — and for the spectators.

And if they write you off, so be it.

They aren’t the ones writing the checks.

10 Must-Have Tools for Successful Media Outreach
How to Manage and Maximize Your Marketing Budget During Times of Economic Uncertainty
What Is Earned Media and What Is Its Value?
Why You Need to Develop Your Website’s Content and Design in Tandem
Avis’ Revolutionary Marketing Strategy